So as you might recall from my endless whining when they discontinued Kokuyo in the USA that I'm more than a little particular about my adhesives (and yes, I'm aware that might be THE understatement of the year --hey it's only January!). So since that sad, sad day when I was cut off, I've been trying adhesives in search of a suitable replacement.

This past weekend I was working on cleaning up the scrappy supply mess that has consumed my basement and during that fun, I came across several projects that go back to 2005 and 2006. So I decided to take a little time to do some quality testing. 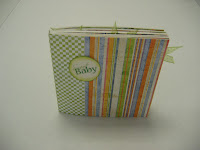 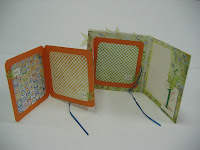 This little beauty (that I promise was the epitomy of scrapbooking style in 2006) was made using the Xyron Cheetah to cover the board book pages. What makes the survival, and near perfect in-tact-ness (yes, I just made that word up) of this piece particulary noteworthy is the fact that it has also endured being a store sample for several months. The Cheetah has been one of my long-time favorite adhesives for covering things and I'm glad to see I can continue to rely on it. This one is definately a top candidate for the first ever "PlayswithGlue Adhesive Award."

Exhibit B - The name of this project is witheld to protect it's identity :)
Layout made about 1 year ago with American Crafts solid runner adhesive. This baby was in need of a complete re-glue. Because of this, DQ'd from contendership. (Yeah, I made that word up too.)

Exhibit C - Greeting Card #1
Made with two different types of adhesives about 1 year ago: 1) Xyron Tape Runner and 2) Ranger Glossy Accents. The tape runner held the paper securely to the card base. The Ranger Glossy Accents were also sturdy and well fixed. Both get nominations for the PlayswithGlue Adhesive Award.

Exhibit D - Greeting Card #2
This was made using the Elmer's Dot Runner about 3 months ago. It's still held together in a few places, but 90% coming apart... so this one chalks up as an epic fail. Also disqualified.

Exhibit E - Circa 2005 Layout
This one had chipboard letters glued to a clear transparency using Ki Memories Clear Glue. Given that ALL of the letters are in a puddle in the bottom of the page protector, this also is getting failed marks... with a research note that it's technically intended to glue acrylic letters to paper, so the failure may have been caused because it wasn't used as directed.  I like to push boundaries, okay?)

Exhibit F - Recipe Card Tin
This baby was also an abused store sample. I used Diamond Glaze to attach 7ge metal tabs to chipboard and it is rock solid. Definately a contender.

The first annual "PlayswithGlue Adhesive Award"
...and the winners are...

Best Tape Runner:
Both the Xyron Cheetah and the Xyron Tape Runner were reliable and well-fixed. The Cheetah is 2" wide -something probably not to useful for all purposes, so I'd say the Xyron Tape Runner wins. (Do keep in mind that I've recommended the tape runner to two of my scrappy friends and they haven't been unhappy with the way the applicator works. Personally, I have found that while it's a little tricky, with a little practive you can adapt and make it work just fine.)

Best Liquid Adhesive:
Diamond Glaze by far. Yes, the Glossy Accents held well, but the Diamond Glaze is like cement!