Everything I Need to Know...

Last weekend I was fortunate to get to take a class from THE Tim Holtz in Shawnee, KS at Stampers Ink. The ladies from the store asked all of the attendees to make a page about themselves for an album they were going to present to him.

Over Memorial Day weekend I set out to create a page about me. Imagine my surprise when I couldn't find a photo of myself to use! I mean, I read things in magazines and other blogs about how important it is to get out from behind the camera and include yourself in your scrapbooks, but surely, I thought, this doesn't apply to me!

Fortunately my mom put her photography skills to work and we set up an impromptu photoshoot. Can you believe that this "headshot" was taken along a bedroom wall with incandescent lights! Ah, the magic of photoshop.  ;)

Some warm, creamy neutrals for your design inspiration today. And have I mentioned that I love the folded book? Oooh the texture! Why can't I think of brilliant things like that? :)


Last weekend I had the privilege of getting to take a class from Tim Holtz. For those of you who know me personally, I'm not really one to get all caught up in the celebrity thing, but let me tell you, I'd follow this guy anywhere! His fun-loving, carefree approach to art is liberating! I really could just sit and play with his inks and stamps all day.

The class was in Shawnee, KS so my mom, two friends and I made the trek from Des Moines on Saturday morning to make a quick girls weekend out of our road trip. We only signed up for one class, but let me tell you, I didn't want our class to end!

On Sunday we did a little shopping at Scrapbook Page and then had lunch at Bates City BBQ. While we were at Bates City BBQ, my friend Julie struck up a conversation with a gentleman in line behind her who'd driven an hour and a half just for the ribs! When he discovered that none of had ordered ribs he ordered an extra slab and dropped it by our table to try. How cool is that? I love it when random acts of kindness occur. Makes you realize that maybe everything you see on TV just might not be true.

Here are a few pictures from our weekend.

Day One
My scrappy companions:
Class hadn't even started yet and we were already having fun!
We took the Patchwork Pandemonium class. We picked it because it's a technique-laden class where you try out and learn to use tons of the Ranger and Tim Holtz products. TOTALLY worth it!
Oh. And of course I doctored up my patchwork when I got home... more about that later.
Class is over. No more Tim :(
Day Two
﻿A sampling of photos from Scrapbook Page. They had awesome displays! Here's just a small sampling of them.

Then it was off to Bates City BBQ where they had fun little signs everywhere.
Oh and the RIBS... the RIBS... I am still drooling over these (and secretly trying to come up with a reason to return to Shawnee, KS just so I can eat them again)!
Posted by Mollie Deem at 10:32 PM No comments:

I love bead board. Tim Holtz, if you're reading this, would you put a beadboard-inspired embossing folder in your next Texture Fades product release? Thanks! :-D

...that I am now a Design Team member for That Scrappy Girl!

Hop on over to her blog to see my inaugural post :) 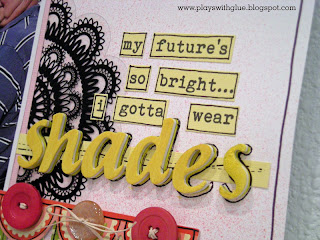 Every week Club CK (Creating Keepsakes Magazine) publishes a one-hour challenge. Now typically this is in the middle of the day on Thursday so all of you working folk like me will miss it. The good news is that they extend a "second-change" prize for a layout published by the following Monday morning.

Now, whether you're in for the prizes is one thing.... However, if you tend to be a bit behind on your scrapbooking (much like me), this challenge affords a great opportunity to challenge yourself to get one layout (just ONE) finished over the weekend. You can find time to squeeze in one lil' ol' layout, right?

This past week's CK 1-hour Challenge List it Out! got me motivated to get a layout done that I had started (digitally) but not finished. Let's put it this way, the original title was 31 things at 30 years...wanna guess how long I've had this one on the back burner?

Anyway, I decided to go nuts with a little (okay, a lot!) of October Afternoon and some Maya Road with a little Tim Holtz for good measure ;) ...and a few hours later (sooner if I hadn't been running out of glue) I had a great new layout completed.

A list of thirty-two things about me at age 32 (did you just do the math? Yes, I started this layout's foundation 2 years ago!). I decided to print the list (because it would have taken forever to line up 32+ boxes) on cardstock and embellish around the list item boxes. 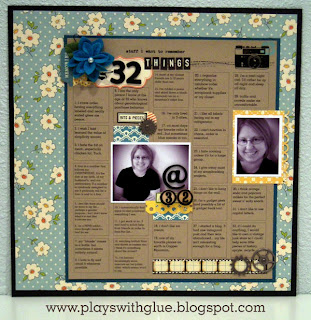 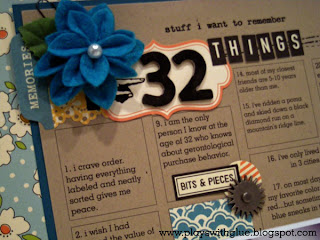 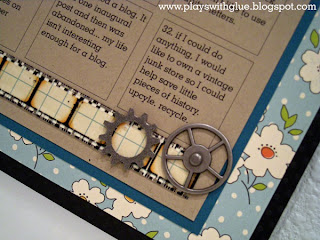 As usual, click to bigify.
Oh, and I've accepted the fact that I'm just never going to be a 2-page layout kind of girl. Hence the action-packed, content-loaded, 1 page layout you see here. Yes folks, it's the superhero of scrapbook pages. The hard-working, single page layout to the rescue!﻿ Trust me though, there won't be any pages made in a phone booth anytime soon.
Posted by Mollie Deem at 12:01 AM 2 comments:

Sometimes you happen upon some color schemes you wouldn't normally think of. This is one of them.﻿ 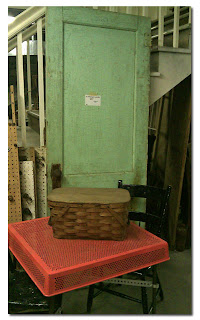 More Owl Soup - can't get enough of it! 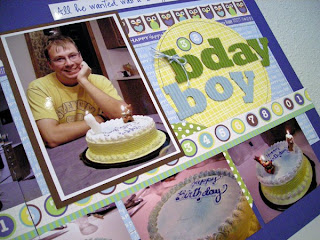 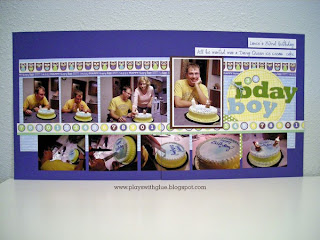 I'm thinking some double-edged satin ribbons paired with some Prima centers could re-create these lovelies. 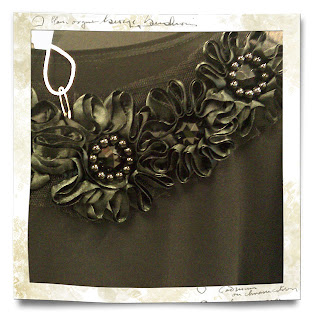 I needed a quick little mini book for a retirement gift and I only had one night to make it. (I prefer to think that was because of my busy schedule, rather than my tendency to procrastinate.) Given that I only had one night and was starting after my LSS had closed, I needed to use supplies I had on hand. Fortunately I had a line from My Minds Eye that was black, white, and gray. This made it super easy to add a  little color with my distress inks in order to coordinate the papers with the logo color of the intended recipient's employer. 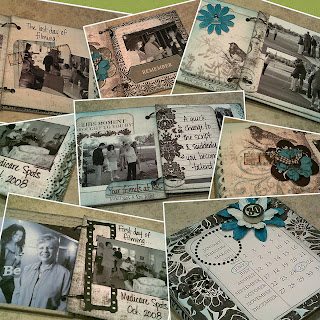 Click image to bigify.
Here are some tips to make a super quick mini book still look fabulous. I think I might have spent more time finding and printing the photos than I did putting the book together!