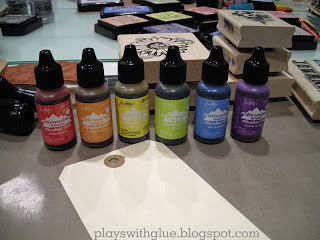 My friend Linda and I got together for some unabashed creative experimentation awhile ago. I'd seen a Tim Holtz video for using compressed air with alcohol inks and wanted to try that technique out. She'd recently taken a class from a RangerU graduate and had a collection of technique tags she was going to teach me. So we got some dinner and got together to play with our creative toys. I have to tell you, it was like two little kids playing! We didn't worry about whether or not we were wasting supplies or if the idea wasn't going to work out. There were no wrong answers and not trying something wasn't an option. If you could think of it, we were trying it that night.
By the time the night was over, we'd tried all sorts of inks and stamps and techniques. I pulled out product I'd had for years, but never used because I didn't quite know what to do with it. Now I'm using my inks and stamps all of the time and actually getting use out of them! Some of the inks we played with I'd had for 10 years and was even thinking of adding to my next purge pile.   :-O 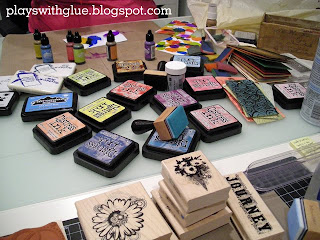 We quickly had all sorts of inks flying all over the place and had used up an entire can of compressed air. 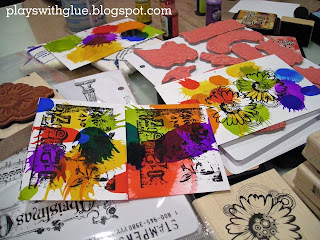 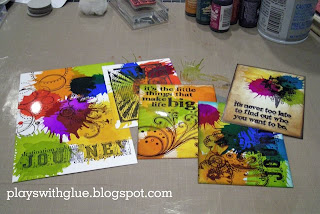 A few more experiments gone wrong... along with a few that went right :) 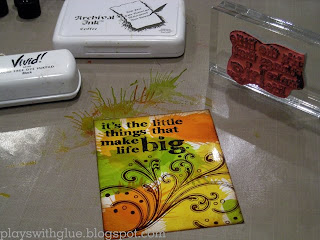 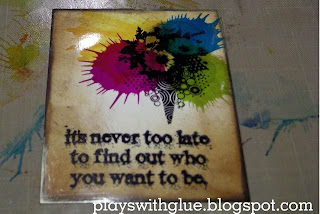 So here's my plug ladies: Play with your supplies! Learn how they work and what they do on different mediums, using different techniques. Or, if you're a little less independently experimental, then find a class at your local scrapbook store and learn something new today! :)
Posted by Mollie Deem at 11:30 PM No comments:

Stepping outside of my box

Part of my purpose for entering the fair was to push myself creatively. Not only did I want to enter all of the categories, I also wanted to challenge myself to try things creatively that I wouldn't normally try.

I am typically a pretty clean and simple scrapbooker. My layouts usually have a simple elegance to them. For this particular creative adventure, I wanted to break past my simple layouts to use more pattern paper. I buy lots of pattern paper, but then I typically find myself only using a little bit of 1 or 2 patterns at a time. Well, I certainly broke past that phobia on this one! In hind sight, I probably would have switched out the pattern paper behind the photos so there was a place for the eye to rest and to make the photos pop a little bit, but otherwise, I'm pretty happy with it... oh and count 'em there's SEVEN different pattern papers on this layout. I'm not sure that this will become my permanent style, but I might break free from 1 or 2 pattern papers and really mix it up with 3.

These happy little farmers belong to some friends of ours. I may be a little biased, but I think these are some of the absolutely most adorable kids I know.  ;0) 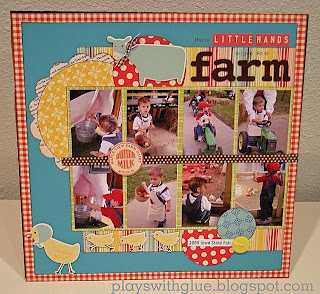 This one was awarded a 3rd place ribbon. 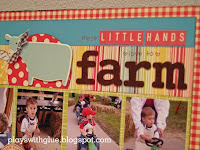 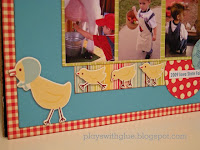 One of the categories at our state fair is "Rubber Stamping - Other Than Paper." After playing with the Tim Holtz splattered ink technique I thought I'd take the technique to some additional mediums and see how it went. I can report that it doesn't work on Tim's special clay coated tags, it works reasonably well on metal but the ink doesn't seem to "stick" very well, and it works smashingly well on gesso'd canvas. So my inky canvas exploration turned into my fair entry. Plus, I have 96 cabinet doors that need to get used up, so I thought I'd use one of those as well.

This entry got a 3rd place ribbon. Pretty cool since it's the first time I've entered this category. 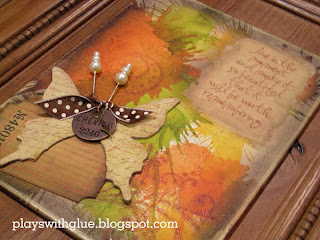 Ok, not really. Or at least not at this time of year anyway! Here's another state fair layout. This ended up being my "single page layout" entry.

Every holiday, my husband bakes pies for our families (But don't ask him to bake anything else, he couldn't make a cake or a cookie to save his life!) and one Christmas morning I snapped this picture of him. It captures his goofy personality (and stylish bedhead as he later pointed out) and I could resist trying to create a layout to capture that energy.

It took a bit of photoshop work to make the photo usable (it was a little blurry and needed some color correction), but it came out in the end.

To capture the look of his flaky crust I cut several layers of the letters "pies" from cardstock, stacked them and glued them together and then painted the edges a pie crust color. Then I created a cinnamon and sugar crust using Tim Holtz Distress Powders and Distress Stickles. One thing to note: if you use the tsukineko watermark pad to emboss with, not as much of the Distress Powders will rub away. If you don't want a fairly solid layer of the distress (i.e. want the Distress Powders to work the way Tim designed), then you really do need to use the Ranger Embossing Ink. I also used a copic marker to re-color the felt pie slice so it would coordinate with my page. 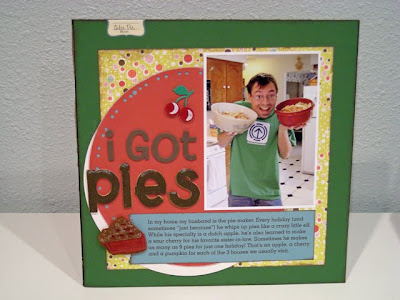 This layout received an Honorable Mention. 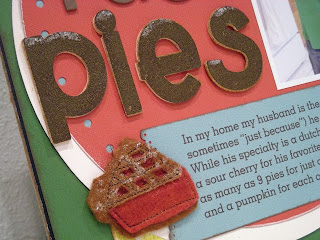 Products used:
Bazzill (cardstock); Basic Grey (patterned paper, felt pieces); Martha Stewart (deep edge punch); Tim Holtz (Distress Stickles and Powder); October Afternoon (tab).
Update (8/23/2010):  Today we went to pick up my entries and the little girl helping her mom with the fair was excited to learn that I was the one who had her favorite entry, "I Got Pies!" Then, as we were walking to pick up my entries she stopped, turned, looked at Lance and exclaimed, "You're the guy in the picture! YOU have the pies!" She then quizzed him all about his pie making as we picked up the rest of my entries. I suggested that maybe he should enter his pies in the fair and she said that was ok -as long as he brought her samples. It was too cute!
Posted by Mollie Deem at 11:30 PM 2 comments:

On a whim last year I decided to enter our state fair. Boy was I surprised when I won two blue and a red ribbon on my first try. High off of my beginner's luck, I thought I'd enter again. As a little creative challenge to myself, my goal this year was to complete entries for every category. So in honor of our state fair beginning this weekend, I'm sharing my entries with you.

I thought I'd kick it off with my favorite entry this year... "Be You"

I've been wanting to do a "messy" layout with cardboard, paints, and inks. I tried to do an album cover earlier with blue and yellow Maya Mists, but that turned out green (oopsie!) so this was my chance to redeem myself.

The background is a chunk of a blueray disc player box that my husband brought home from work for me. He was riding his motorcycle that day and actually stuffed 3 pieces (just in case one got wrinkled) of cardboard into his riding jacket to bring it home. Do I have an awesome husband or what? 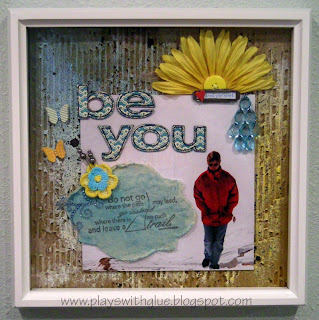 Coincidentally, it was a favorite of the judges too -this one won a blue ribbon. yay! :)